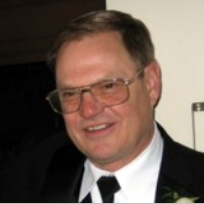 Dick Blumenthal began boating on the north shores of Lake Washington at age five. His “yacht” consisted of an eight foot homemade dingy and a pair of oars. He quickly learned how to row, spending many hours fishing and exploring the lake. By age seven, he graduated to a three-horse Evinrude, an engine that seemingly weighed as much as he did. Within a couple years, the family bought a small ski boat and Dick became proficient in waterskiing using bindings made from tennis shoes nailed to their homemade skis. From this early exposure to the water, Dick’s interests continued to grow.

Throughout his childhood, he cruised in the San Juans with family and friends, learning of the secrets held by the numerous islands. In the early 1960s, Dick joined the Sea Scouts, helping to build a fifty-foot boat which was launched in the spring of 1963. She was christened the SES Argo and can still be occasionally found cruising around Lake Washington and Puget Sound country.

Dick’s love of the water was briefly interrupted when he accepted employment in 1970 with Pacific Telephone in San Francisco. Raising a young family did not offer many opportunities to enjoy San Francisco Bay or the nearby Pacific Ocean. He returned to Seattle in 1976, found employment with Pacific Northwest Bell and within a couple years, began chartering boats out of Anacortes. Dick purchased Les Frères, a forty-four foot Hatteras, in 1992. He retired from the telephone company in 1999 after a twenty-nine year career.

Because of his long-time experiences on the water, in the late 1990s, Dick became more interested in local maritime history. Through his investigations he located the original journals of our earliest explorers. He transcribed this material to get a better sense of their efforts, the hardships they faced and the places they visited. These journals are now available in his first three books.