Charles Wilkes and the Exploration of Inland Washington Waters 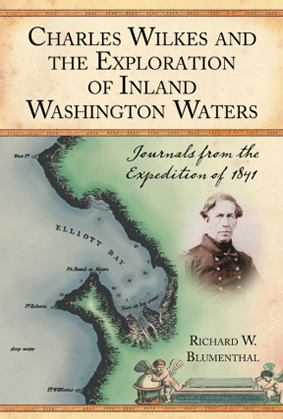 Charles Wilkes and the Exploration of Inland Washington Waters completes our early exploration with Wilkes’ discoveries in 1841.

Wilkes was responsible for many of our place names in the San Juan Islands, and most of the names in Puget Sound. Special attention is paid to these names as well as his reason for the name.

The text includes the journal of Charles Wilkes, ten of his men, and also includes eighteen meticulous charts. None of this material has previously been printed.

Because the majority of the survey work was accomplished by Wilkes’ men, their journals are critical to understanding the process. They include Augustus L. Case who spent several weeks examining Hood Canal.

The journal of George Colvocoresses provides detail of their interactions with the native Americans, their trade and heavy reliance on the natives for fish and game. Colvocoresses also provides a description of the native custom of flattening the heads of infants.

The journal of acting master George Sinclair provides the first (and rather negative) description of Elliott Bay along with his other survey work in Port Orchard and Saratoga Passage.

Along with additional descriptions of surveys and the native population, Joseph Perry Sanford describes his visit to “Old Man House,” the home of Chief Seattle at Suquamish in Port Madison.

Joseph B. Clark wrote of the shore-side activities at Nisqually which was headquarters for all of the survey activities. He described crewmen getting lost in the surrounding forests and the events of the first fourth of July celebration held on the west coast which led to one shipmate loosing his arm from the accidental discharge of his musket.

Because of the time spent in survey activities, Wilkes and his men gave us some incredibly detailed charts which, even today, can be used for navigation purposes. Perusing these charts included in the text will provide readers a sense of their accomplishments.

WA residents 10% sales tax will be added at final checkout